The interesting thing about vintage watches is the history behind every model. Be it the history of the brand, how, when and why a model came onto the market. Was it worn to a special occasion maybe (keyword «Moonwatch»)? Who has worn it?
When the event or the wearer became famous for some reason, myths arise around the corresponding model and it becomes (more) desirable. These stories are what make the engagement in vintage watches so fascinating for most of us. That’s what gives it that extra something.
One of the highlights in the history of Certina is certainly the chapter «Tektite Experiments».

Tektite I was a federal underwater experiment that took place from February 15 to April 15, 1969 in the Lameshur Bay of St. John, one of the U.S. Virgin Islands in the Caribbean Sea. In this experiment performed by the U.S. Navy, NASA and the American Department of the Interior in collaboration with the General Electric Company, four aquanauts spent 60 days in an underwater habitat 15 meters below sea level. It was the first scientists-in-the-sea program sponsored nationally. In addition to exploring the bottom of the sea, the main objective of the experiment was to study the behaviour of the scientists under these unusual conditions.
You might wonder why the NASA was aboard. Finally, researching the oceans and the universe has much in common. Like astronauts, aquanauts are working with reduced gravity during their hours in the water and have to live together in a confined space for an extended period of time. These were, in view of the space missions that followed in the next years, important findings for the space agency. The project name, “Tektite” should also symbolically linked the program’s oceanographic and space scientific interests. It borrows the name from small meteorites (tektites) that survive the fiery plunge through the earth’s atmosphere and often come to rest on the ocean floor.

The underwater habitat of Tektite was designed and built by General Electric Company Space Division. It was comprised of two steel cylinders attached to a rectangular steel base. The two towers were connected by a flexible tunnel and contained a upper and lower level measuring 3.8 m in diameter and 2.7 m high. It therefore had a total usable area of ​​approximately 45 m². One of the cylinders had a glass dome for observation on top. The living quarters included four built-in bunks, lockers, a sink, a stove, a fridge, radio and TV. The bridge contained the environmental control and alarm panels, the communication panels and other ancillary instrumentation. The equipment room held the electical system, a large freezer, and a toilet. In the wet room were a freshwater shower, stainless steel tables for specimen preparation and study, a clothes dryer and storage space for scuba gear. 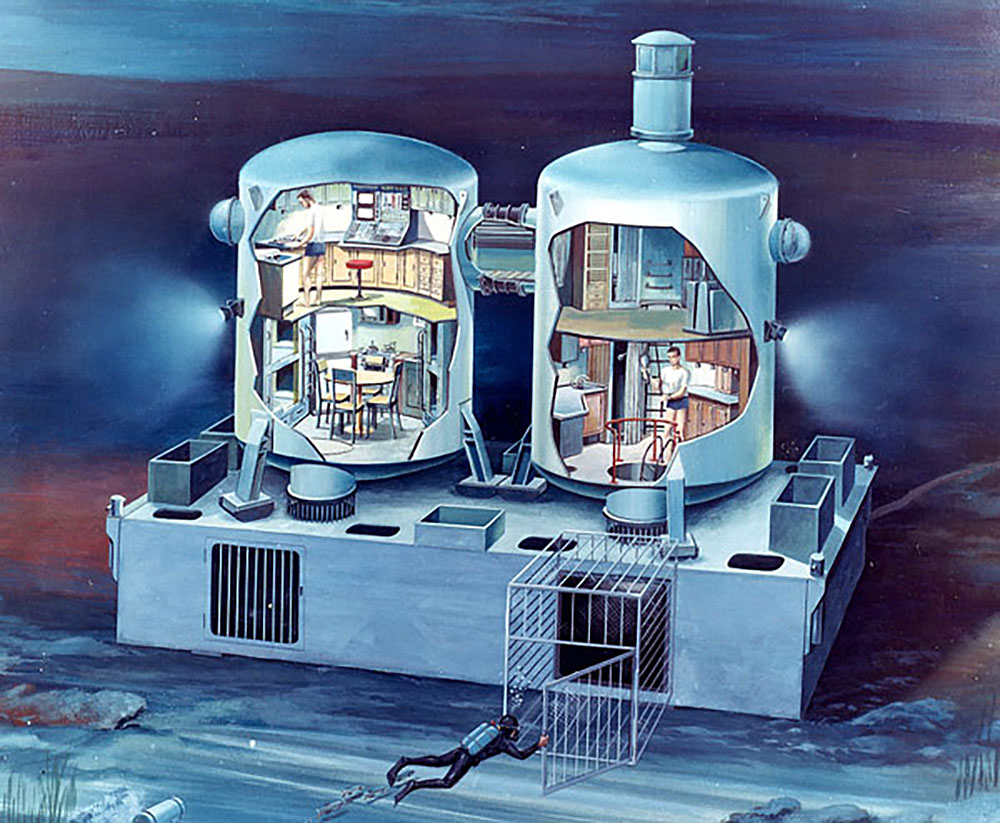 The complex was designed as comfortable as possible. It had carpeted floors, adequate lighting, attractive color scheme, and large hemispherical windows in each room. The meals were partially prepared in the habitat. The dive team consisted of A. Waller, John G. Van Derwalker, Conrad. W. Mahnken, H. Edward Clifton and the backup aquanauts Ian G. Koblick, Gary E. Davis, and R. Lawrence Phillips. On February 15, 1969, the four aquanauts entered the Habitat and remained there until April 15. The mission duration of 60 days would not be surpassed for the next 23 years.

As sport diving became more and more popular in the 1960s, the watch industry increasingly developed new and better diving watches. So it happened that even two swiss watch manufacturers were of the party. Certina and Rolex equipped some members of Tektite with diving watches to test them in practice under these extreme conditions. Rolex supplied Sea-Dweller and Submariner models, Certina provided its then-top diving watch, the DS-2 Super PH500M reference 5801 123. It was evaluated according to 13 criteria, receiving the rating “excellent” six times, the rating “good” five times, and “satisfying” twice. The “satisfying” concerned the band and clasp. I did not know for which band it was valid, since it can be assumed from the photos that the watches were tested with steel and Tropic band. The following is a cutout from the Certina company magazine “Certina Echo”, spring edition 1970, in which the test results were published. 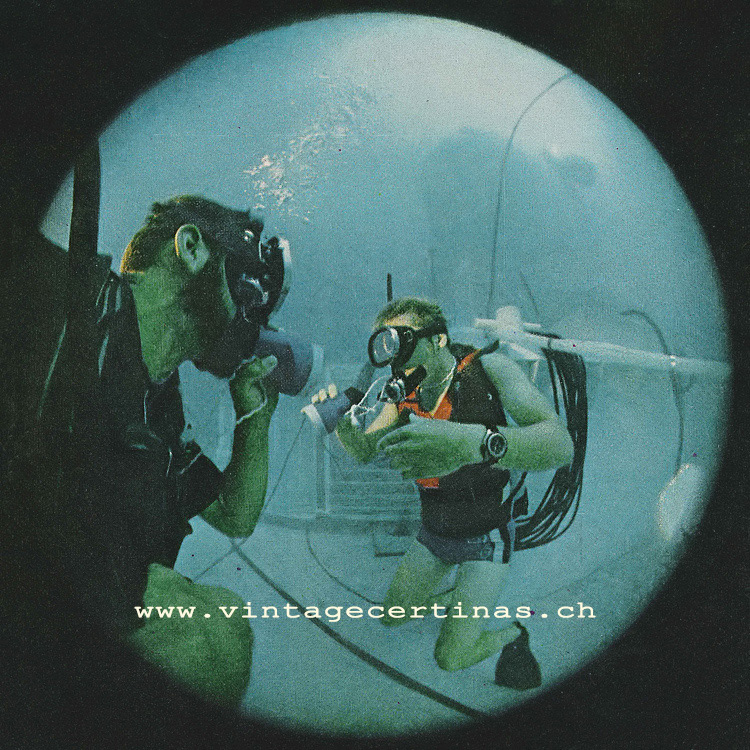 The Tektite I project was considered a great success and the two diving cylinders were submerged a second time in the Great Lameshur Bay. In the Tektite II project, run in 1970, five aquanauts shared the underwater base for periods of two weeks (on average), returning to this habitat between their dives for scientific exploration. A total of 10 missions with 53 aquanauts were carried out between April and November. In the sixth out of a total of ten missions, for the first time, an exclusively women’s diving team, led by marine biologist Dr. Silvia Earle, was on duty. This was also the first NASA mission with female participation. 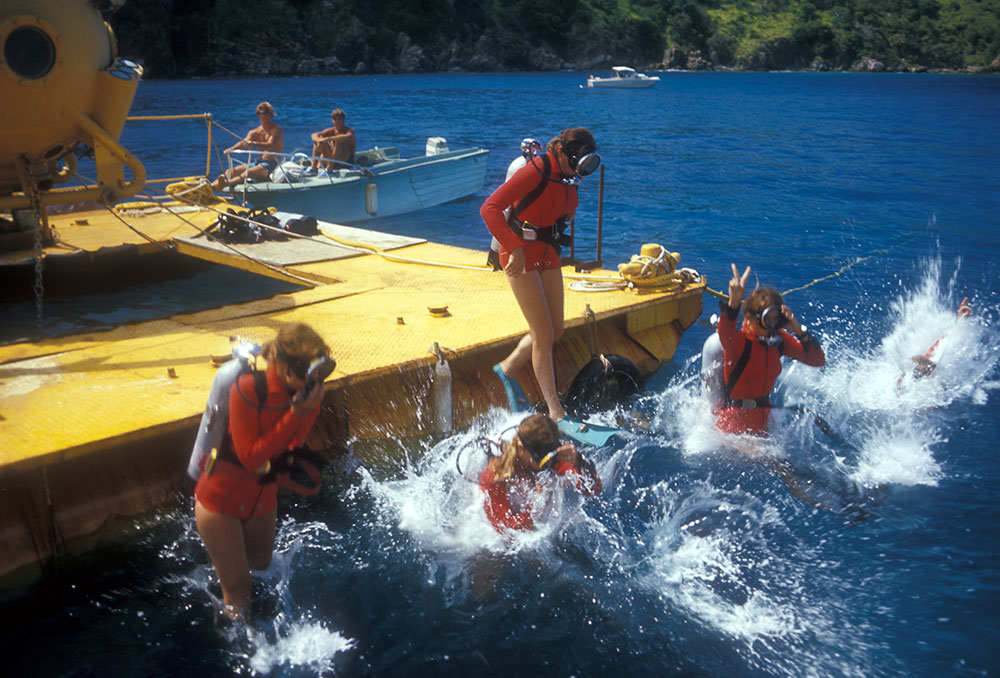 Based on a story published in “Certina Echo” which you can see below, the DS-2 Super PH1000M Reference 5801 302 was provided by Certina for the project. But apart from the habitat, the Certina DS-2 Super PH500M was also reused by a few scientists who had participated in Tektite I. This can be seen, for example, on photos from the National Geographic magazine. 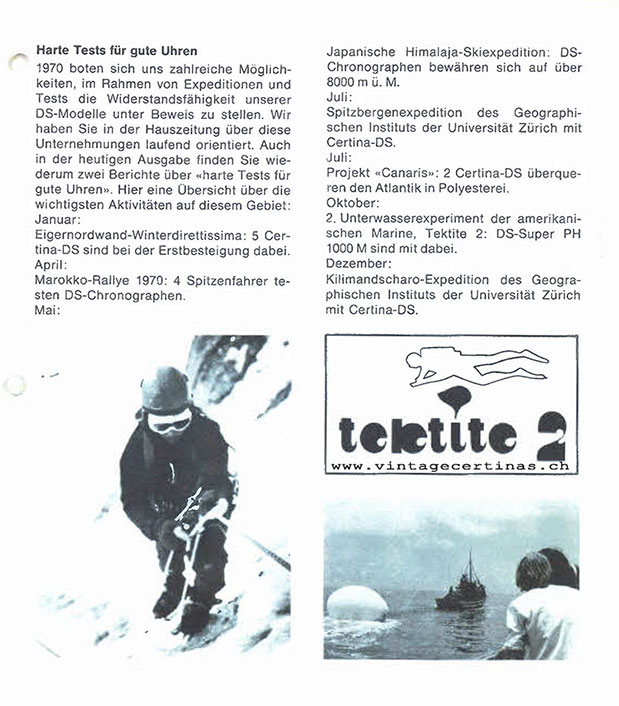 So, as I know this is the historical background of the Tektite experiments and the use of the Certina watches. For those of you who want to learn more about the Tektite project or simply like to watch movies, I’ve added two interesting videos on the topic:

I also did some research on this story. For example, using the above-mentioned article and photos from various magazines, I was able to prove that the 500M and not the Super PH1000M (like described in the Certina history at this time) was used in Tektite I.
I also tried to contact some people involved from time to time. Unfortunately, these attempts remained unsuccessful and because of the spatial distance, I did not pursue this too stubbornly.

So I was very pleased when a gentleman named Ian G. Koblick contacted me in the mid of December 2016 (if you have read the text attentional, the bell rings). It turned out that he was an aquanaut at Tektite I & II. Ian was backup aquanaut at Tektite I and development manager and science program coordinator at Tektite 2. So I could bombard him with my questions and some gaps in this story could be closed. Ian was also so friendly and gave me some Tektite memorabilia which are great additions to my existing collection. 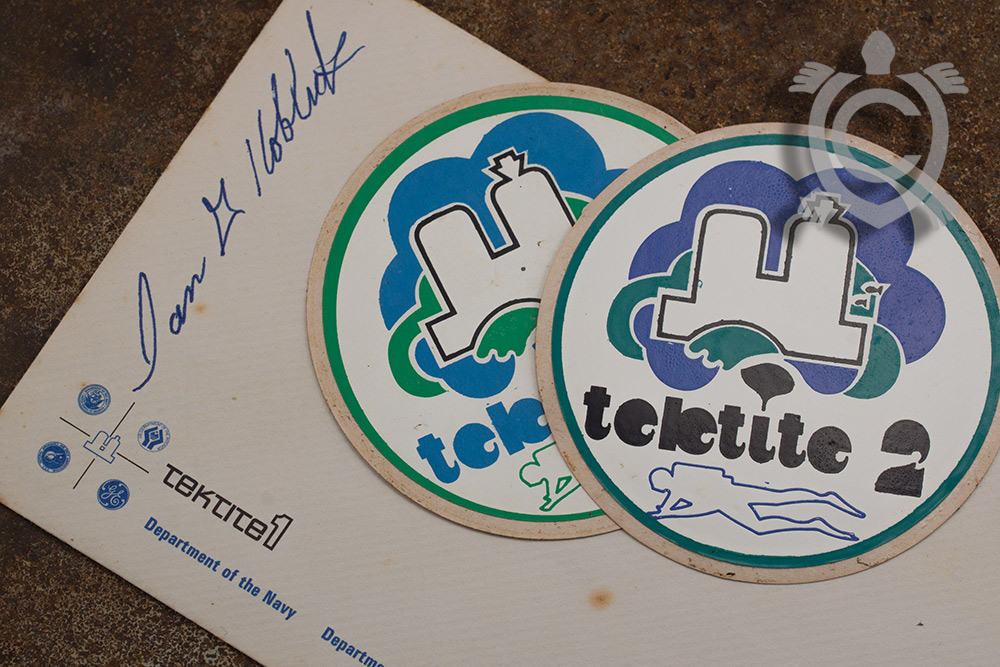 At this point the story could be finished, right? But wasn’t there something else..? Oh yes, his Certina! Did I mention that he wanted to sell it? He had contacted me to find out how much he could ask for. Interestingly, at this time I came across the following article, which I would not withold from you: Prototype Single Red Sea Dweller Non Valve from aquanaut Ian Koblick.
Ian had therefore also received a Rolex besides the Certina. He told me that he was wearing the Rolex mainly for the prestigious occasions, but his main working watch, which he used in the diving missions of Tektite I and II and later at PRINUL was the DS-2 Super PH500m. Ian designed the undersea lab of PRINUL, called “La Chalupa”, and managed the program from 1971 to 1976. You can also learn a lot about Ian and his adventurous life in Philippe’s article. He has spent a big part of his life under water quasi and his friends include Jacques Piccard, Scott Carpenter, etc.

Ian also sent me some photos where he wears the watch during Tektite. This is one of my favorite pictures: 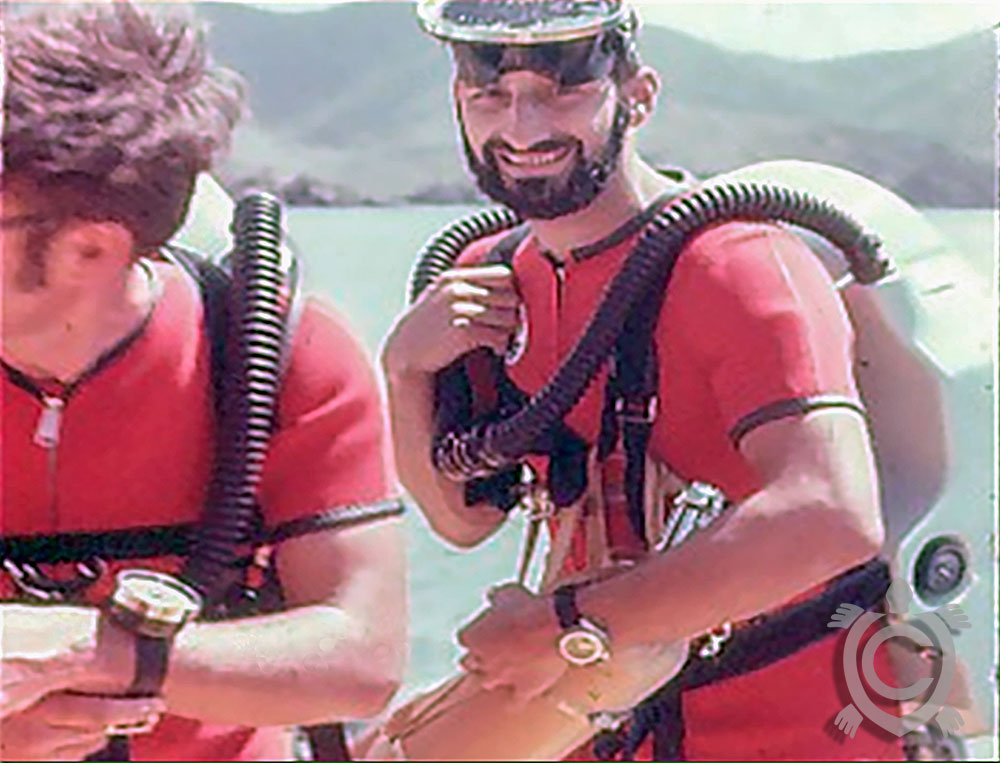 I also asked him to send me a photo where he is currently wearing the watch. The time difference between the two photos is 47 years. Ian is now living in Key Largo, Florida, and since 1986 he runs the underwater hotel “Jules’ Undersea Lodge”, which was the world’s first hotel of its kind. It was built in the decommissioned underwater habitat “La Chalupa” which was established between 1972-1975 off the coast of Puerto Rico. In this habitat the current record for the longest time spent living in an underwater fixed habitat was set up in 2014. His Marine Resources Development Foundation has a second habitat, the MarineLab Undersea Laboratory, which is still being used for research purposes.
Ian also co-authored the book “Living and Working in the Sea”, which was published in 1985 and is a standard work on the subject of diving and underwater habitats. 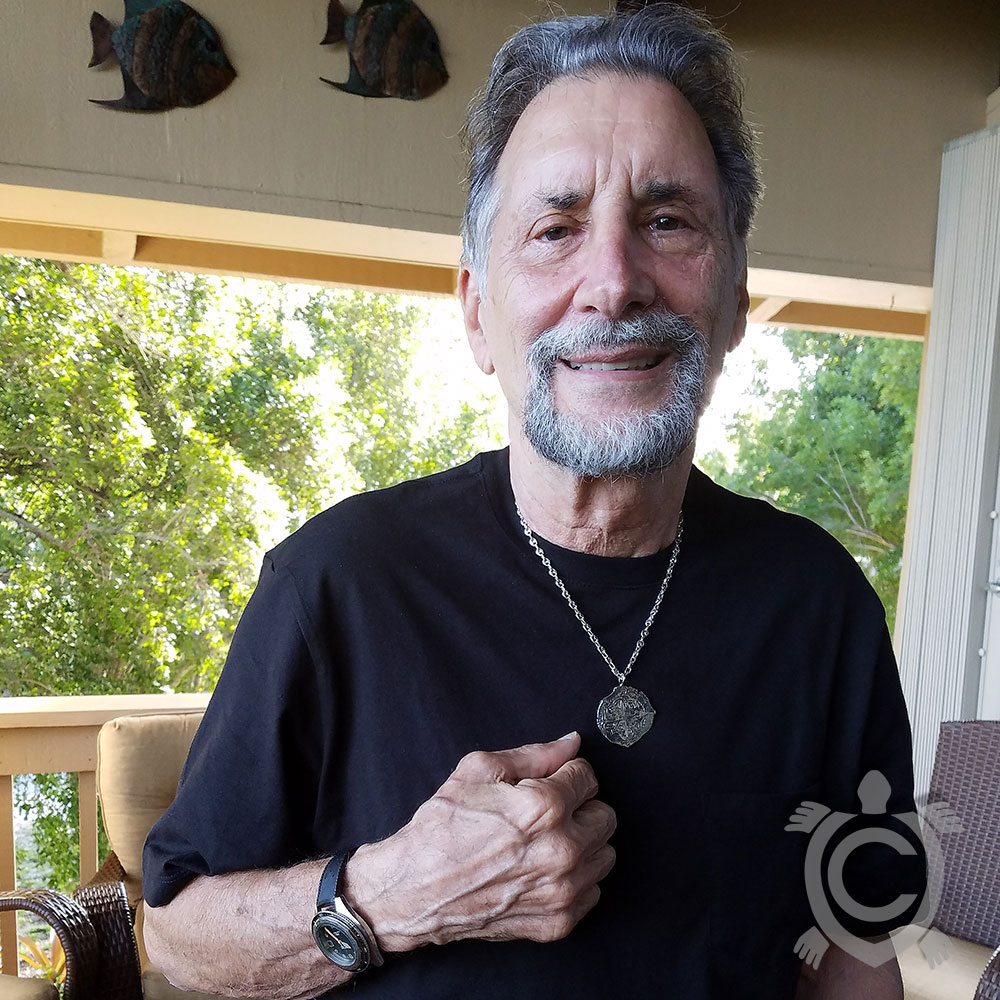 What can I say… In the end we had a deal, and the watch set off to me. And so, in the end a dream came true which I would never have expected; to own one of the original Tektite Certina watches!

Originally, there were probably only two or three specimens of the 500M tested at Tektite. Unfortunately I know nothing about the whereabouts of the other watches so far. Ian was so kind to ask some of his former colleagues about that. From this, however, no new knowledge has emerged yet.

Finally, the watch arrived after her three-day trip from Florida: 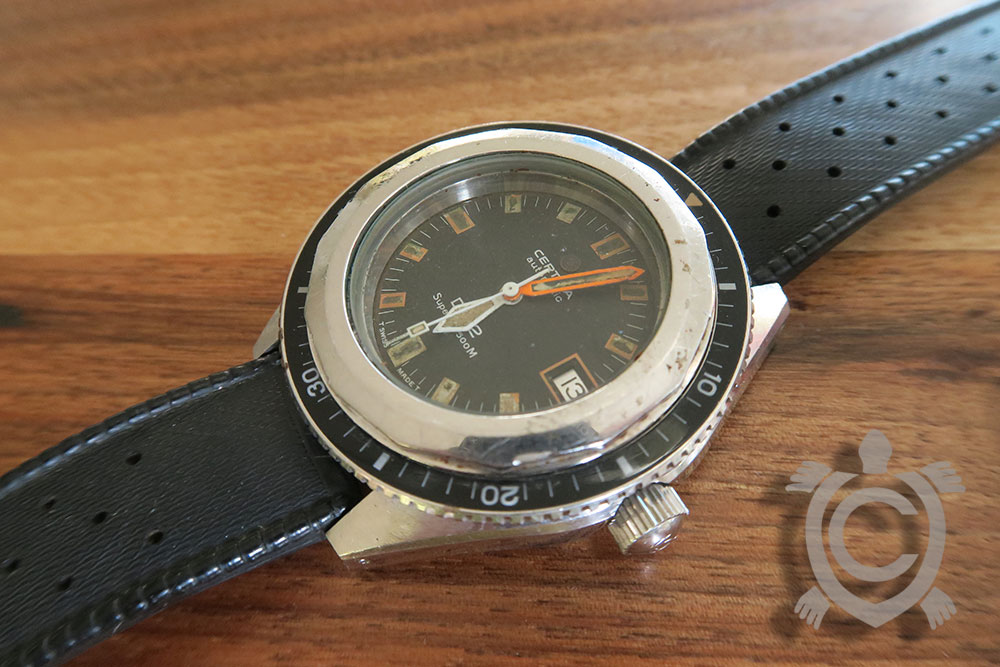 As you can see that the watch was used. Definitely no deskdiver but a tooltatch with history. There seems to have been moisture on the dial side. The movement, a 25-651 looked clean and the crown could still be screwed. The bezel also worked. With this construction you have to push down the bezel to turn it, otherwise it is locked. When the crown was turned, however, an ugly smelling sound arose. The seals were just sticky mash. So I first removed the remains of the caseback seal. After that, I brought the watch to my watchmaker. The case should remain so because it is a contemporary witness. At most a bit of cleaning. But technically it should function perfectly again.

After a few days I could pick up the watch again. At this point, thanks to Remo Serrem for the speedy completion. The calibre had run dry and my watchmaker had to replace some parts. But there were no rust in the movement or under the dial. The movement runs again as if it comes fresh from the shop. A real Certina tractor! Afterwards I cleaned them outside. Below you can see some pictures of the revised watch: 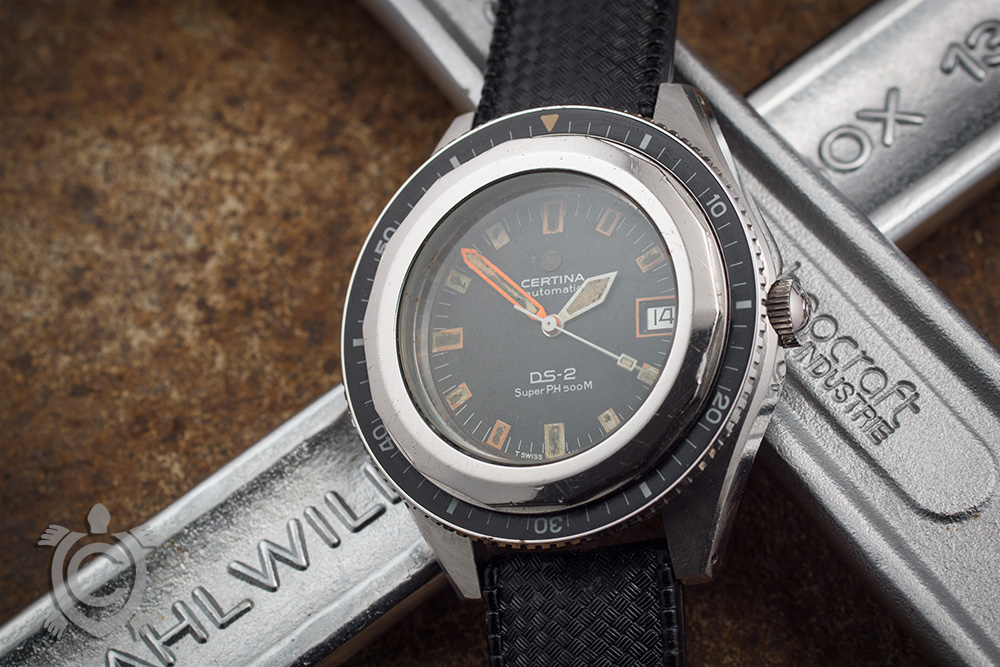 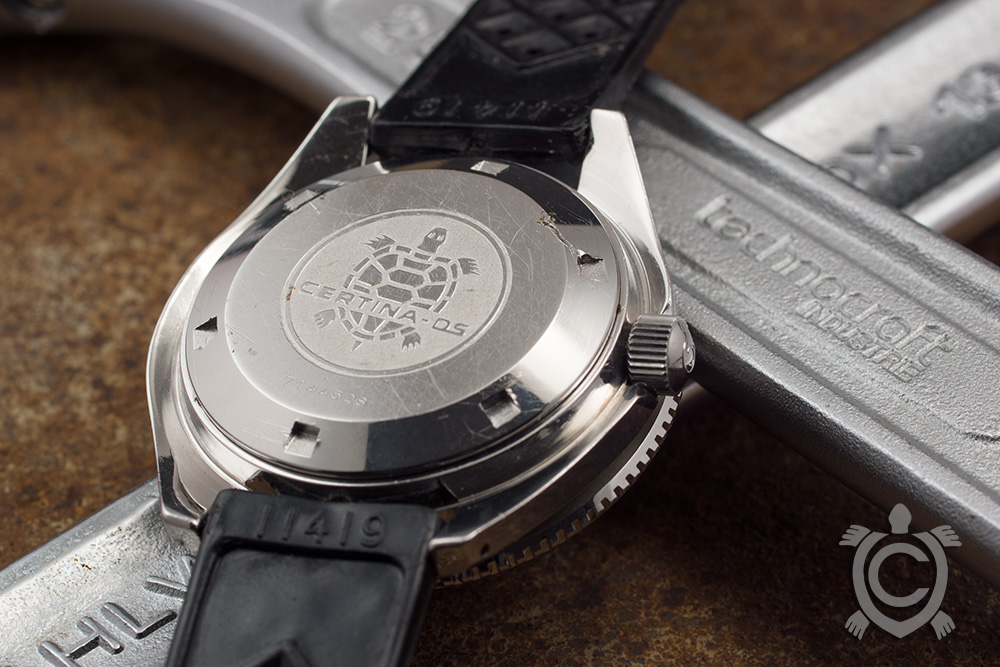 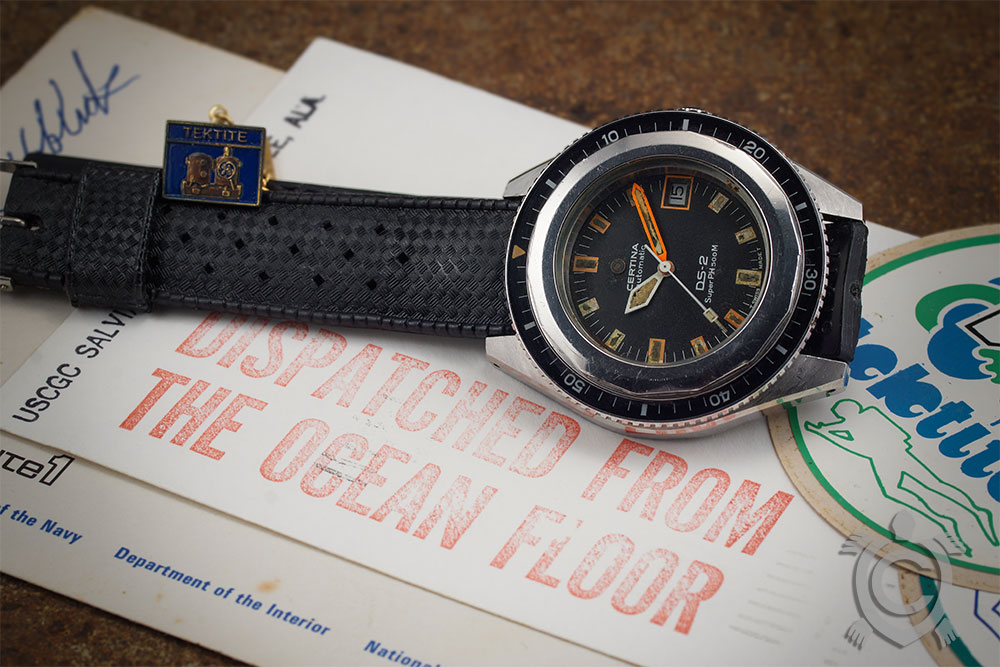 Below you can also see a picture from the True Magazine, issue September, 1969. In the picture you can see Ian G. Koblick on the left with his, well I mean mine of course, Certina DS-2 Super PH500M. He wear it on the right arm. Ian is left-handed. 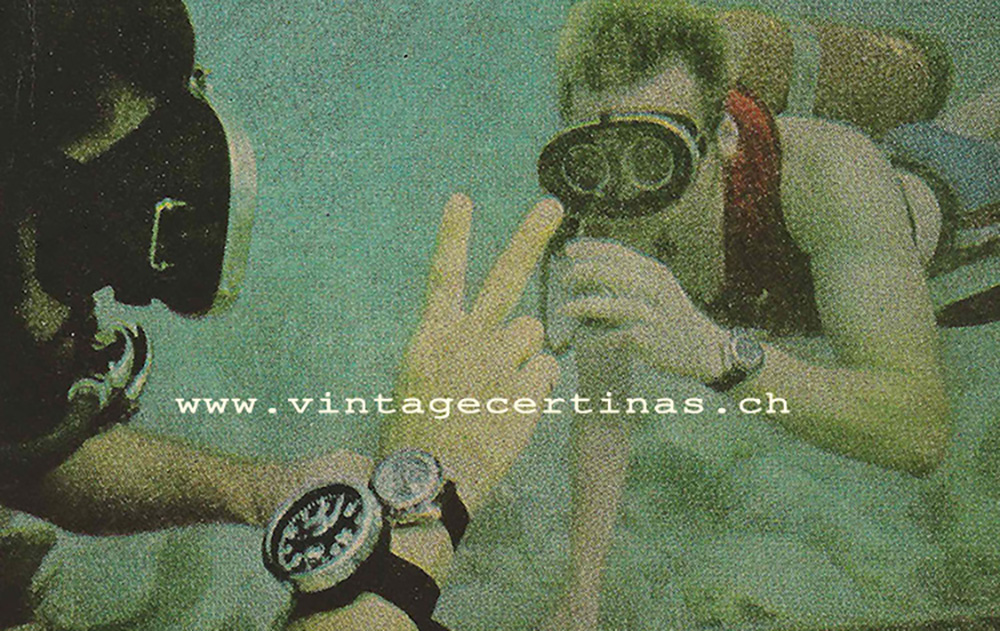 Well, what can I say? I would never have thought that I could own one of the Tektite watches someday. For me personally, the Tektite experiments for Certina are what the moon landing was for Omega… Yes, I know, this is a bit overestimated, but I guess you guys know what I want to say.
That this watch, one of the historically most valuable Certinas ever, my “holy grail”, has crossed my path after almost 50 years, can not be a coincidence. Don’t you think so, too? I would like to thank Ian for letting me bothering him with my questions, and that he finally left the watch to me.

The sixties were the golden era of these underwater experiments. Thanks to this, one made enormous progress in the diving technique. Many insights later have some influence on space travel as well. The collegiate proximity between aquanauts and astronauts reached a climax in August 1965, when US astronaut Gordon Cooper took up radio contact with his former colleague Scott Carpenter. At that time, Cooper, in the space capsule “Gemini 5” was about 240 kilometers above Earth, while Carpenter, meanwhile an Aquanaut, sat 62 meters below water off the coast of California in the habitat “Sealab II”.