Certina DS PH200M – The return of an icon

Since its foundation in 1888, Certina has stood for robust and reliable watches. With the introduction of the DS system in 1959, this reputation was reinforced and in the 1960s the robustness of the DS system was repeatedly proven through spectacular tests and participation in expeditions. Milestones in the history of Certina and at the same time first-class endurance tests were the participation in Sealab and Tektite experiments of the US Navy (more on this here https://www.vintagecertinas.ch/de/certina-taucheruhren/). During this period, the Certina Manufacture showed that with its diving watches, along with manufacturers such as Rolex, it belonged to the world’s elite.

So in 2018 – after 130 years of the brand – it is just logical to revive a model from this era. In addition, reissues of diving watches have been in vogue for a few years now and the trend is currently unbroken. You could say that Certina jumped on the train a little late. But however, it should not be forgotten that Certina launched a reissue of a classic diving watch in 2004, the DS-3 Super PH1000m, limited to 1888 watches, and so was one of the pioneers of this trend at that time.

How it all began…

The new edition of the Certina DS PH200M was born at Baselworld 2017 and the task was clear, a treasure from Certina’s rich history should be reawakened. But which model should it be? When I met the Certina team, the decision was quickly made. We had the same watch in our heads. The DS PH200M (reference 5801 117) from 1967. I took the following photo into the session as an “appetizer”: 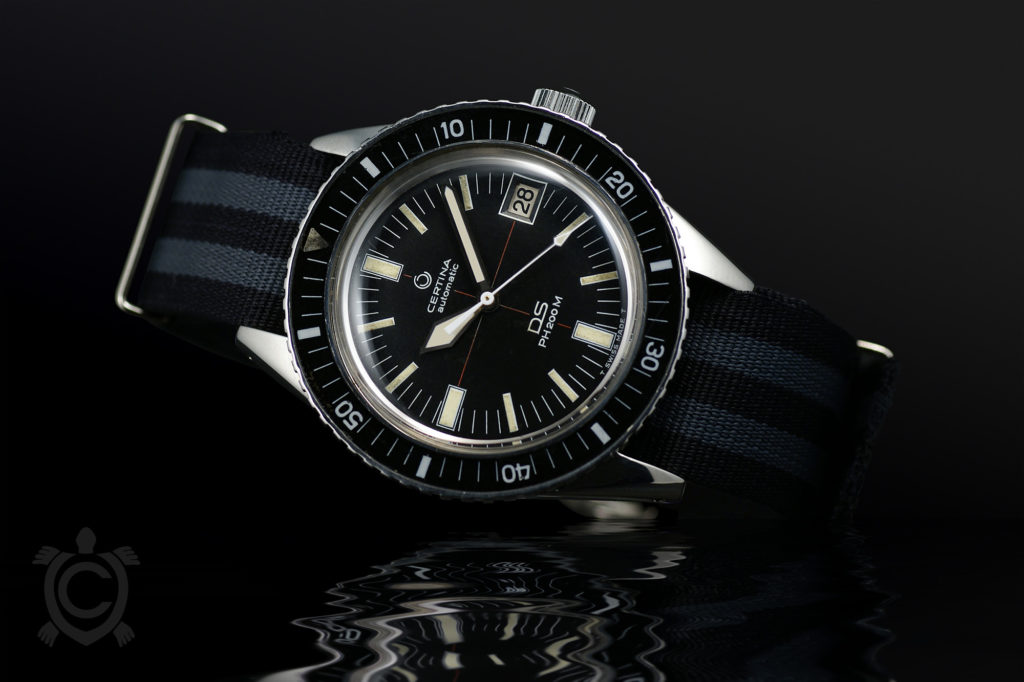 The schedule was limited. The model should be ready for the market by Baselworld 2018 and the first pre-series models should be available. However, the production team was full of enthusiasm and committed itself accordingly. I was allowed to follow the whole process in an consultative role, which was quite exciting, of course. Thanks again to the Certina-Team for letting me be a port of it!

I received the first renderings last summer. The original DS system from that time should be reused. Therefore, parallel to the design development, it had to be tested to what extent this is possible with a new automatic movement. Yes, you read it right; the new Certina DS PH200M should again be equipped with the glorious original DS system introduced in 1959! 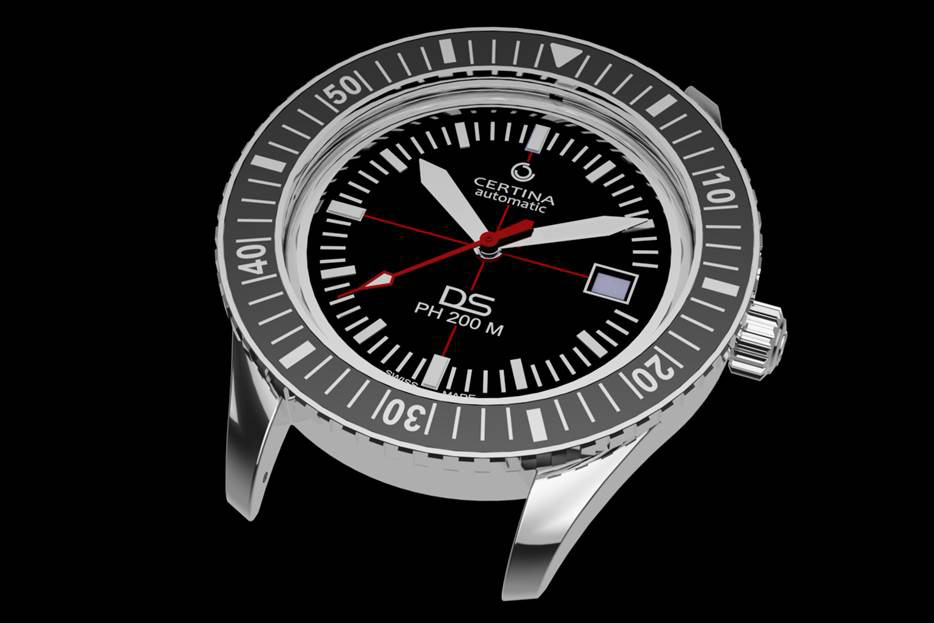 One of the first renderings © Certina

DS is the shortcut for “double security”. This was achieved by floating the whole movement in the case with the help of an elastic shock absorber ring in addition to the conventional shock protection (Incabloc). There was also an air gap between the dial and the case, allowing the movement to move in all directions. Further features were additional gaskets, an extra thick and reinforced Plexiglas as well as a strengthened caseback.
If we speak about the acronyms; the PH in the designation “PH200M” stands for “Pressure Hydrostatique” (water pressure) and thus denotes the water resistance to 200m or 20 bar.

At the end of August, the dummies from the 3D printer arrived. I also got some pictures of that. Finally, at the beginning of February, the first prototypes were assembled, which for the first time gave a real impression of what the watch should really look like. And at the end of March 2018, at Baselworld, the time had finally come! I was able to hold the Certina DS PH200M in my hands and strap it to my wrist for the first time. This was a great moment, of course!

Meanwhile I received my exemplar. This is still a pre-series model, which I have worn the past weeks and would now like to introduce to you in more detail. 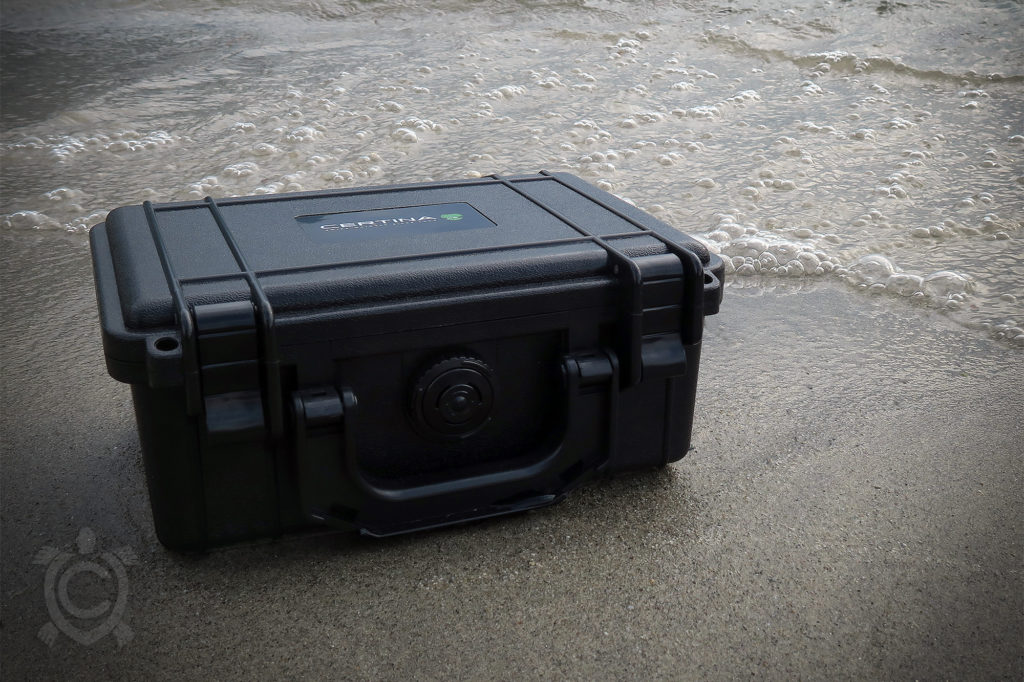 The first thing that stands out is the unique (and of course waterproof) Peli Case, in which the watch is delivered and creates a reference to diving and Toolwatch. After it is opened, you can find the watch fitted with a honey-coloured leather strap and beige contrast stitching, next to it the black-grey striped Nato strap. The textile strap is quite thick and has a leather lining at the holes. It makes a very high-quality impression. I’m a little Nato band fan, so I really like the included band. 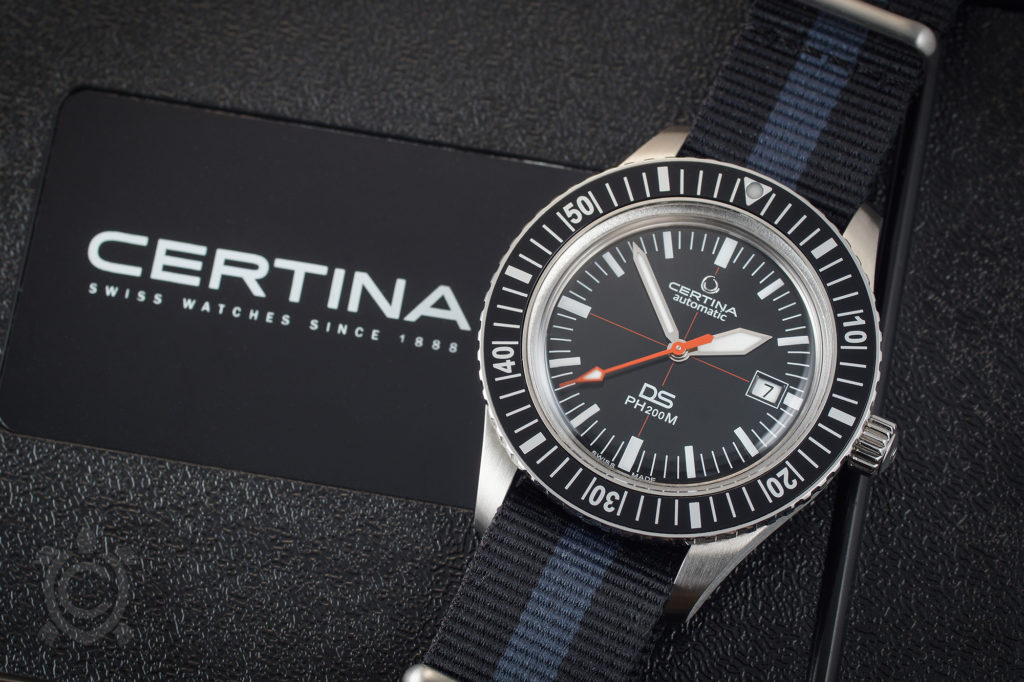 In order that the straps can be changed without tools, so-called quick release spring bars are used. This makes changing the belt quick and easy without tools. A polished buckle is attached to both straps. In my opinion, a nice detail would have been if it had also been designed in the style of the old clasps or at least satin-finished like the watch. 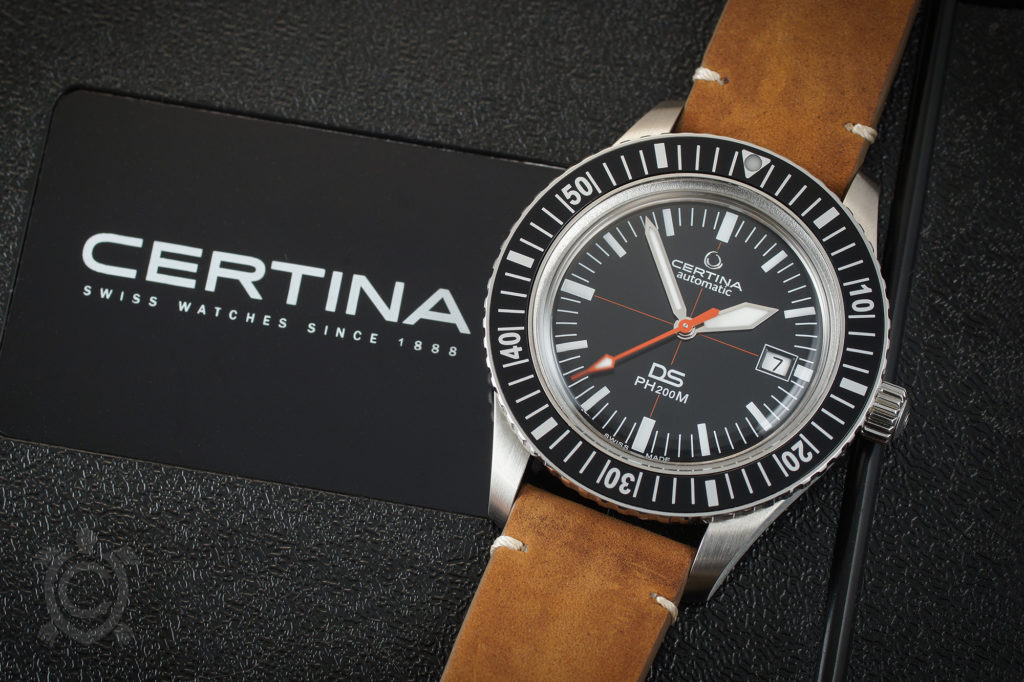 Let’s take a closer look at the watch. The stainless steel case is satin-finished at the top and flanks. The case of the original was polished all around (as far as I could verify this on the basis of old exemplars). The satin finish gives the watch a high-quality look. The diameter of the case is 41 mm, that of the bezel 42.8 mm, lug to lug 52 mm, the height is approx. 13.2 mm, the lug width 20 mm. 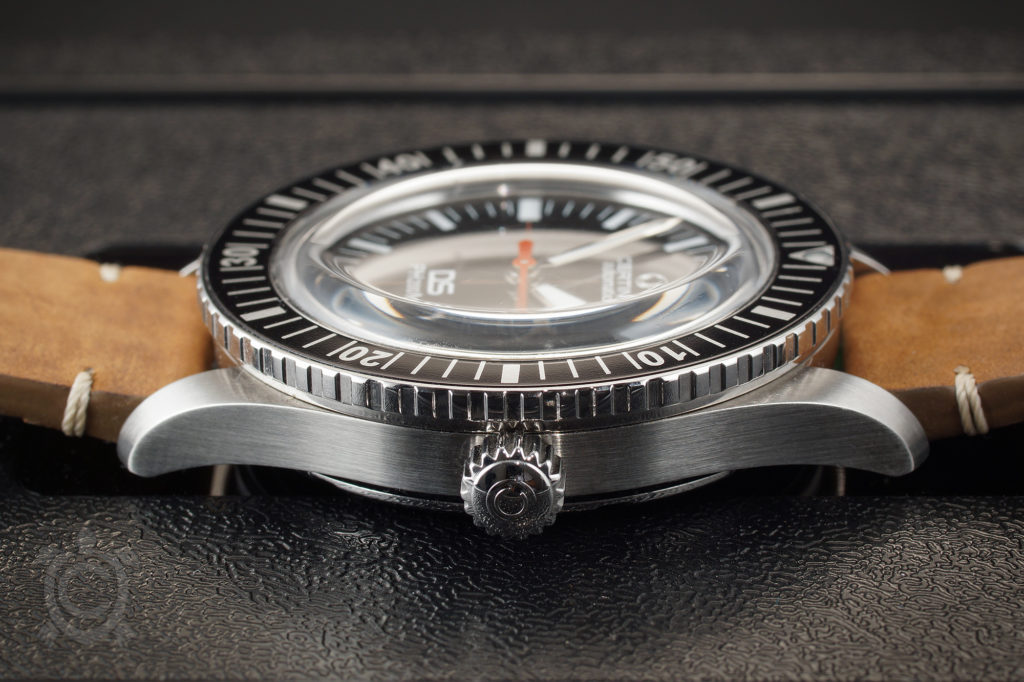 On the grippy screw-down crown you can find the engraved logo with the two into each other rotating “C”  as it was usual in the days of the original. The bezel inlay is made of aluminium, contrary to the bakelite inlay on the original. Here, an inlay of sapphire glass would have been visually closer to the original. However, this would have been reflected in the price. The undirectional bezel has 60 clicks.

One detail that was very important to me personally from the beginning was to keep the look of the domed plexiglass. Certina decided to use a domed Hesalit box glass, also for reasons of historical attention to detail. It is anti-reflective on one side and has a scratch-resistant coating (NEX Scratchguard). This is a courageous decision, as there are certainly people who would have preferred to use sapphire glass for reasons of scratch resistance. However, you can simply polish out any scratches yourself. In addition, the feel and look are simply great. Vintage lovers know what I’m talking about, not for nothing does it say: “Plexi is sexy”. 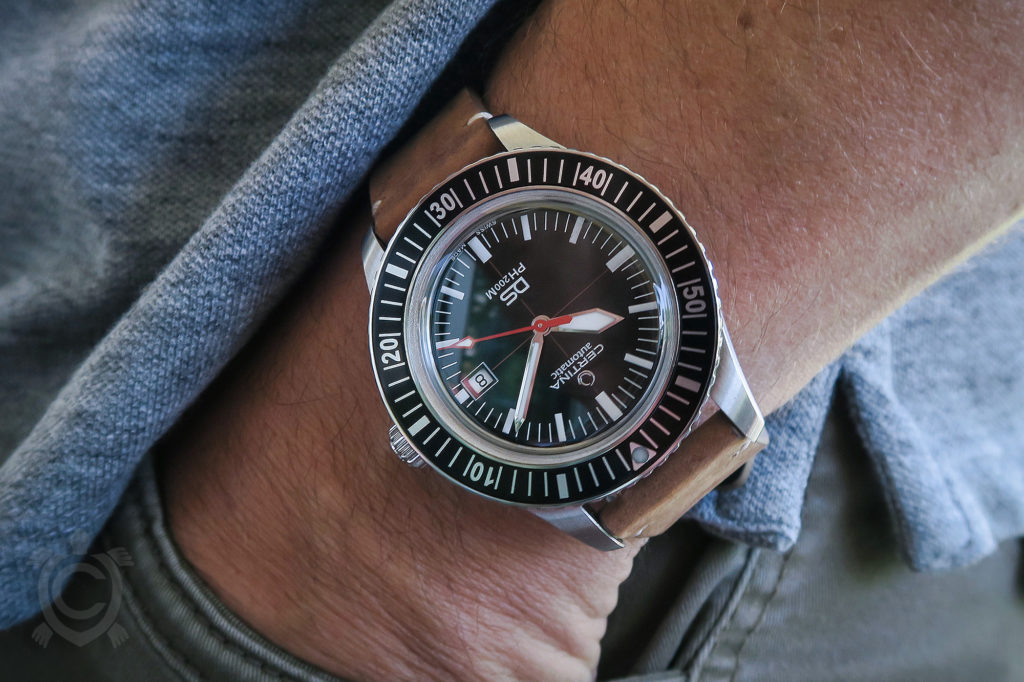 The face of the watch, the black lacquered cross-dial dial with the silver-coloured sword hands and the red second hand can be seen under the just this plexiglass. In the original, the second hand is not lacquered red. Purists may criticize this, at first I was rather bothered about it. In the meantime, however, I perceive the red splash of colour as an “eye-catcher” which gives the watch that certain something and harmonizes well with the red cross on the dial. Also on the dial we can find the old Certina logo, which is applied. A nice detail, as you often find it with models from this time. On the original, it was just printed. 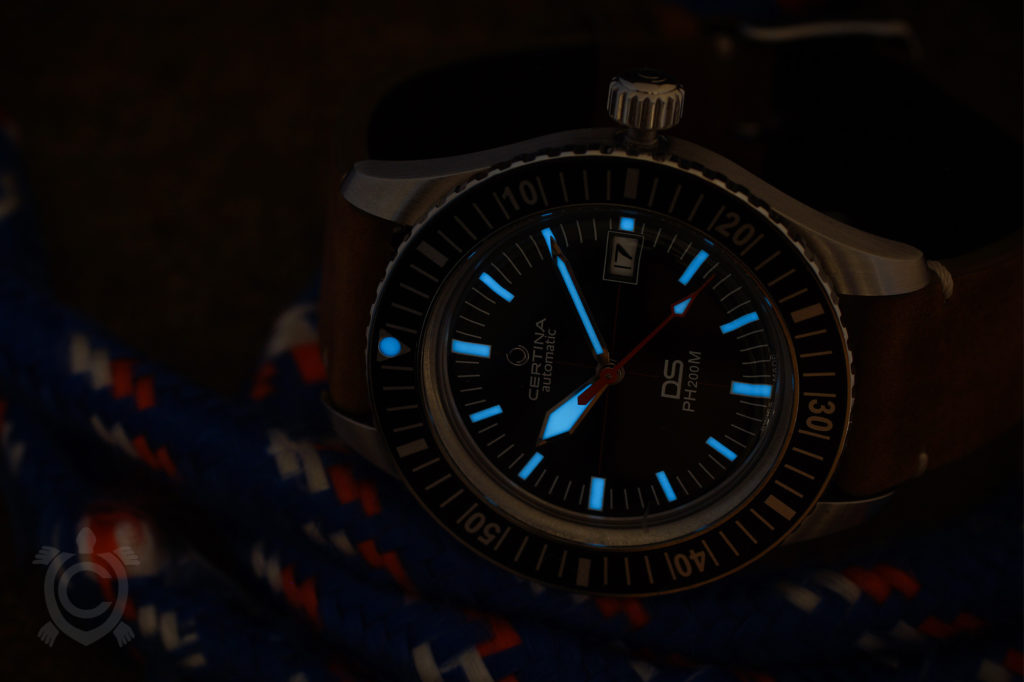 As it is to be expected for a diver’s watch, the indexes and hands are coated with luminous material. The SuperLumiNova luminous mass has a light cream tone that is barely perceptible depending on lighting conditions and discreetly underlines the vintage character. In the dark, it glows in bright blue. 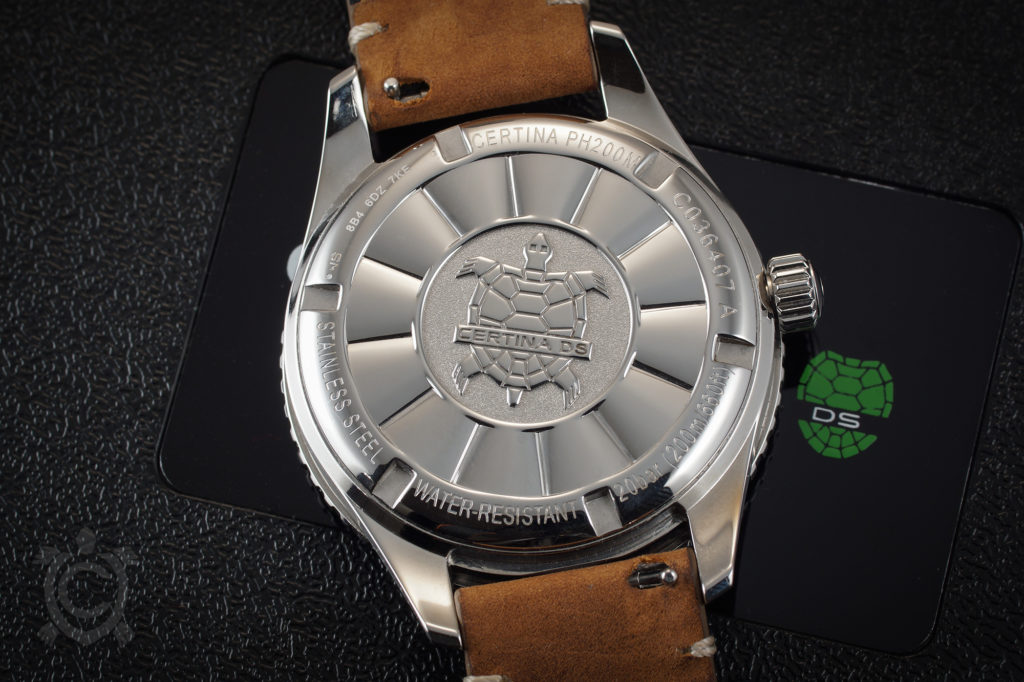 Another highlight that will surely make the heart of every vintage Certina fan beat faster, is the screwed bottom with the well-known (at least for vintage lovers) turtle in the middle and the wave pattern around it. As well as the case back of the original. In this epoch most DS models with automatic movement had this back. The case back of this pre-production model does not yet correspond to the final version. There the area with the wave pattern will be matt and not polished. 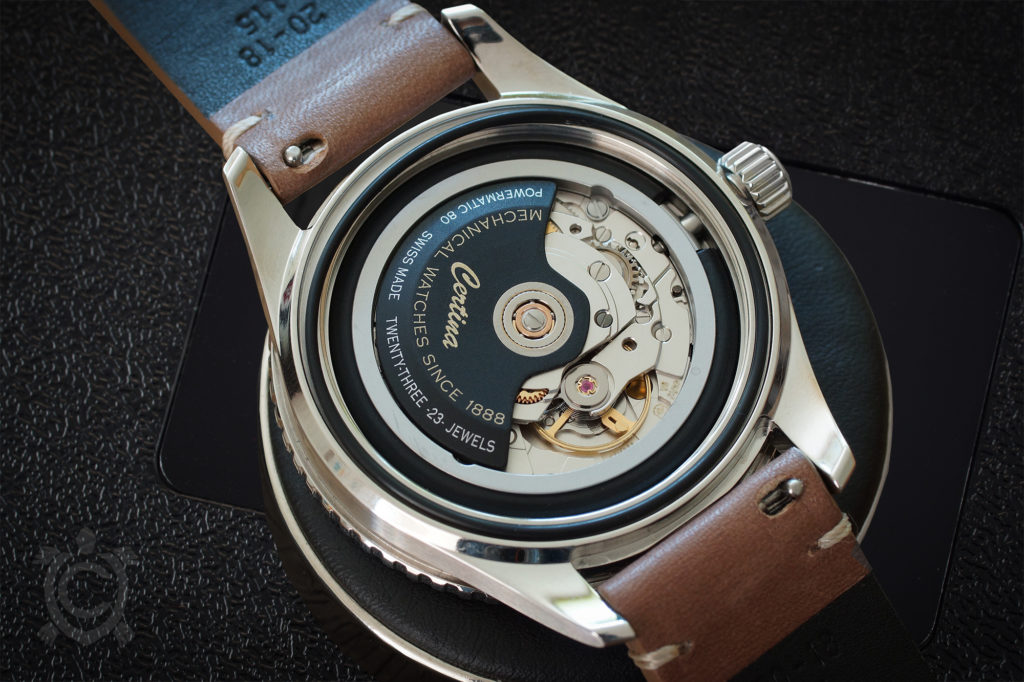 Inside the watch, the automatic caliber ETA C07.111, better known as “Powermatic 80”, is doing its job. It owes its name to the 80 hour power reserve. This caliber, which was launched in 2012, was based on the ETA 2824-2. It has 23 rubies, a date display and a hack mechanism and operates at 21,600 vibrations per hour. By the way, the date has a quick-set, only if someone should miss the 25-651’s curble… ;o) The picture above shows not only the black rubber ring, which protects the movement against shocks, but also the mentioned strap changing system.

Each DS PH200M is tested for water resistance up to 20 bar, which, as the name suggests, corresponds to the pressure of an assumed water column of 200 metres. The waterproofness is tested according to ISO 22810. This standard describes the different classes of water resistance and the test method used to determine it.

Let’s place the original and the new edition side by side: 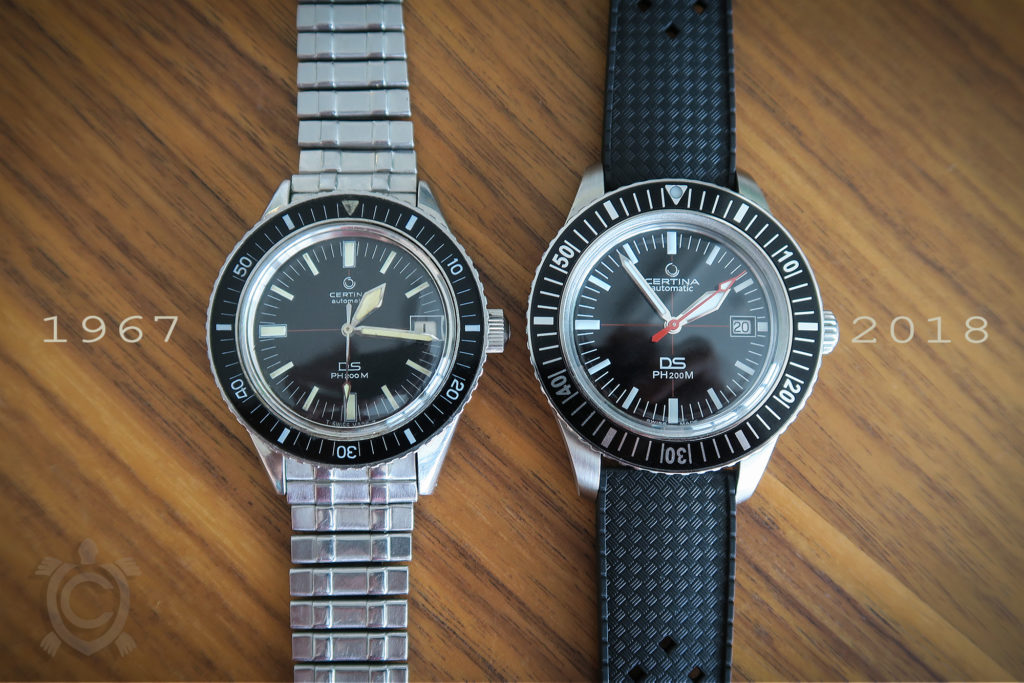 The original from 1967 has a case diameter of 38 mm, the bezel measures 40.3 mm and lug to lug 49 mm. The re-issue has therefore grown all around between 2.5 and 3 mm. Despite the larger dimensions of the watch, it still wears well on my 17.5 cm wrist. So if you only let yourself be put off by the mass, you should at least bind it to your own wrist and judge it in real life.

Of course, the difference in size is noticeable when comparing them directly. However Certina did not simply want to release a copy of the 1967 DS PH200M, but wanted to refresh not only the technology but also the look to keep it up to date.

It is self-evident that my report is not entirely impartial because of my involvement. It should therefore not be a classic “hands-on” article. I would simply like to introduce the watch to you and recommend you to strap it on yourself on occasion. There are a few little things I probably would have done differently. However, in view of the price being called, it becomes clear that a few compromises had to be made. In any case, Certina has done a great job and launched an attractive watch at a very attractive price. Where else can you get such a well done re-edition for 695 francs or 695 euros from a renowned Swiss manufacturer?