The clouds hung low above the wild and lonely trough of the Mayanghdi-Khola. Seen dimly and intermittently trough the mist rose a savage rock wall, avalanches roared down from the heights and a storm raged on the glaciers. This was Dhaulagiri wheater.

This is the beginning of Max Eiselin’s book “The Ascent of Dhaulagiri”. Max Eiselin, born in Kriens in 1932, was the head of the Swiss expedition team, who succeeded the first ascent of the Dhaulagiri (at this time the last not yet climbed eight-thousander) in the spring of 1960. Eiselin had already attempted an efford in 1958, but had failed. But on 13 May 1960 (a Friday!), 6 out of a total of 13 members reached the 8167 m high summit. Among the first climbers of the summit were the Swiss Albin Schelbert, Peter Diener, Ernst Forrer, the Austrian Kurt Diemberger and the Sherpas Nima Dorje and Nawang Dorje. 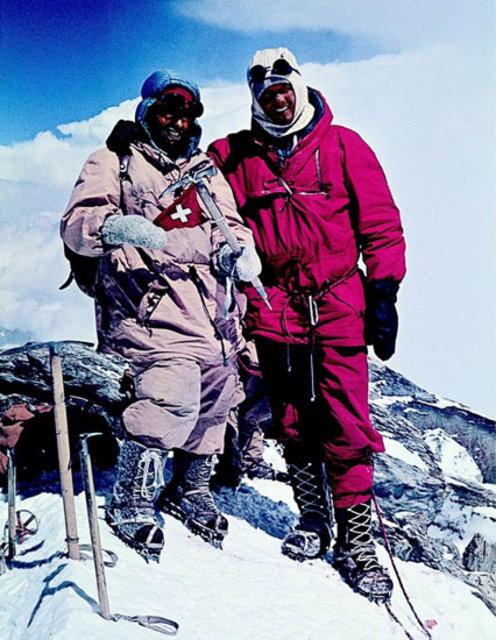 After the first unsuccessful attempt in 1958, Eiselin was convinced that the key to success is not in the “Pear Route” but, in his opinion, much lighter and safer northeast ridge. At his tip, an Austrian team attempted this line in 1959 and reached a height of 7800 meters but missed the summit.
This was the way for a second expedition, led by Max Eiselin, in the following year. Since the squad did not have enough money, they “begged” all the equipment. The biggest source of income was an action with about 30,000 greeting cards, which could be bought for five swiss francs. They also found support in the press, especially the “Tages-Anzeiger” and the NZZ, which had already published large articles with the postal check account of the expedition before the journey began. 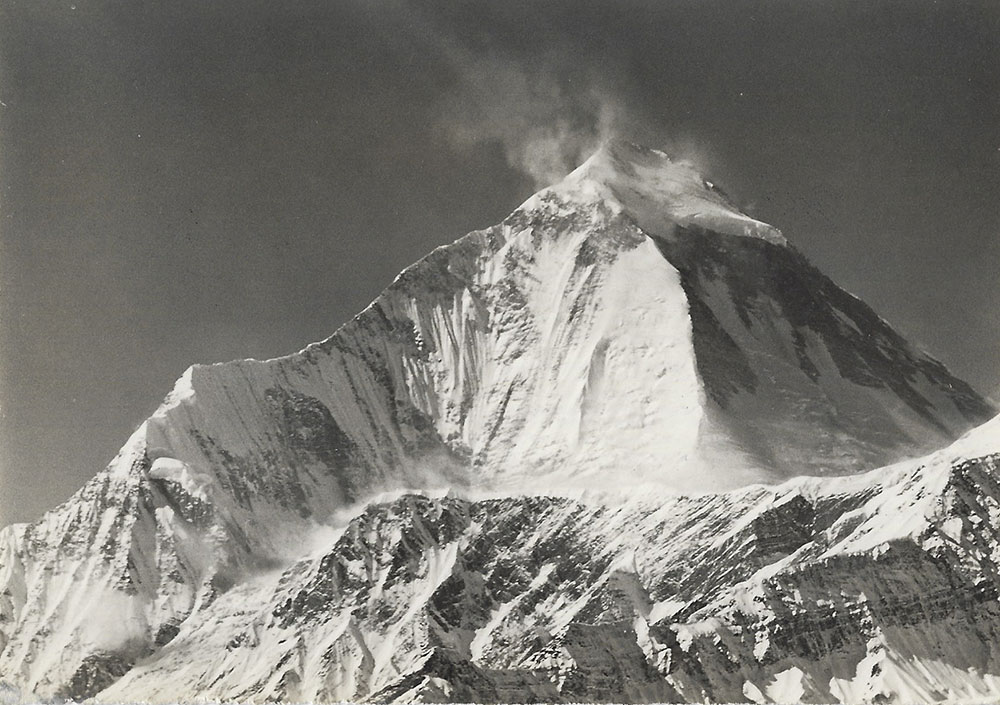 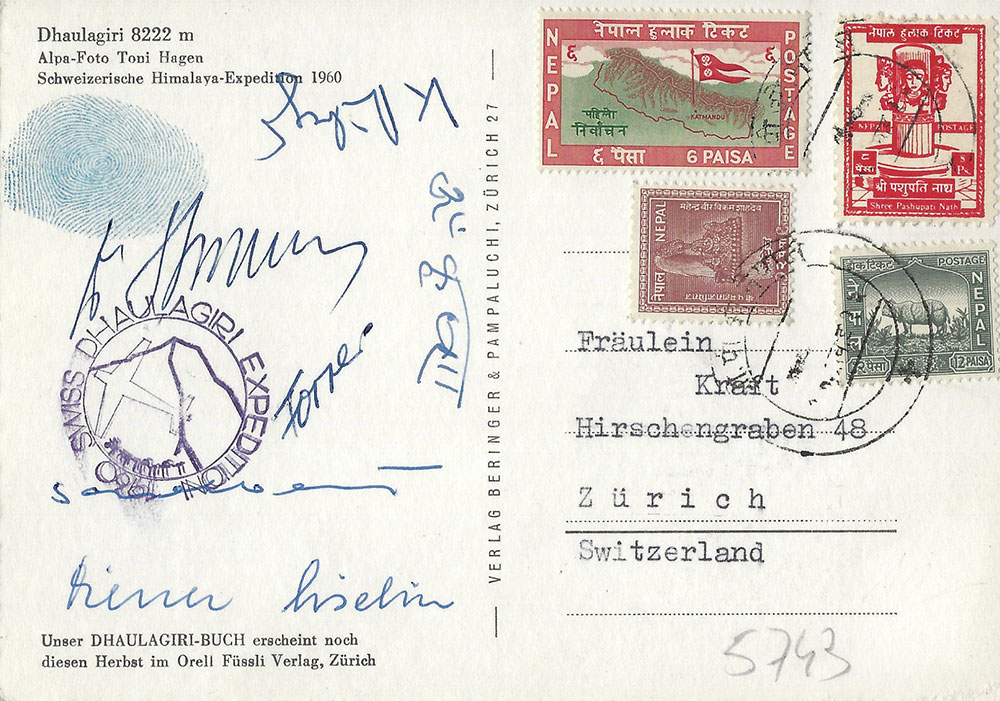 In this expedition, for the first time a cargo plane was used to transport the equipment as well as the members to the base camp 2 at 5’750 m altitude. Thereby, the prototype of the Pilatus Porter PC-6 (HB-FAN) set the, still valid, record for highest landing. (Registry in the “Guiness Book of Records” for the world record of the highest landing of a fixed wing aircraft). Mr. Eiselin named this airplane “Yeti”. It crashed during a difficult takeoff maneuvre on May 5, 1960 but luckily, nobody was injured. 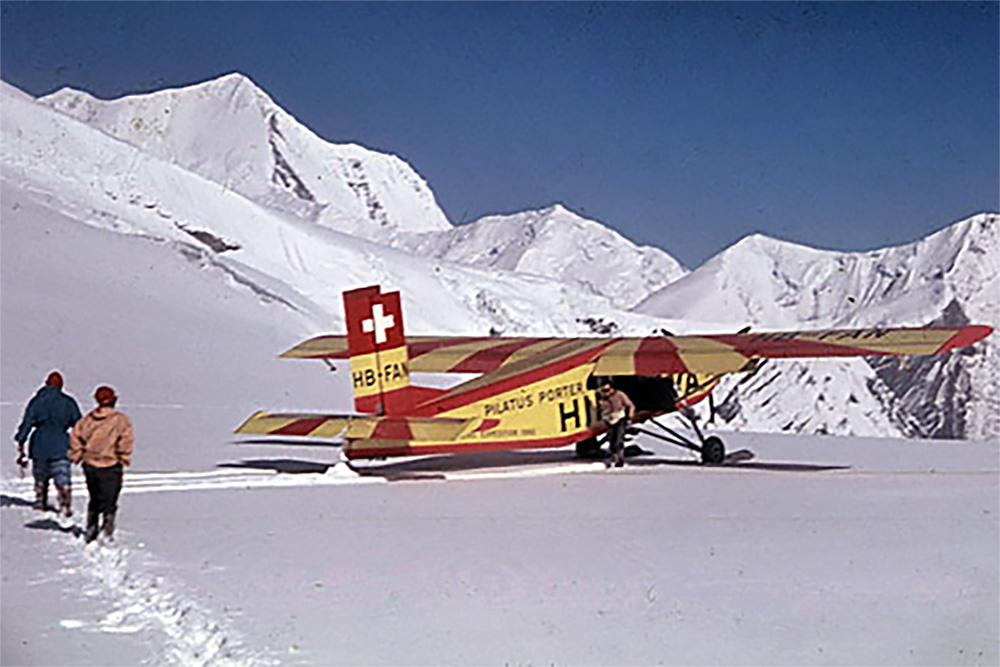 Aside from that the watches used are also interesting. It should be Certina DS models. The entry in the Certina history from 1960 says:
“The Certina DS accompanies an international expedition on the first successful ascent of the 8,167-metre-high Dhaulagiri in western Nepal. It overcomes all the challenges – from strong temperature fluctuations to considerable height and pressure differences – with no problem at all.”

Next to it, a picture showing a man with a wristwatch on a mountain. Who this man is, where this picture was made and what watch is it, is not clearly recognizable on the photo. The picture, however, comes from an article of an issue of the Certina house newspaper “Echo” from 1960, which is about this expedition. So far the whole thing should be documented. 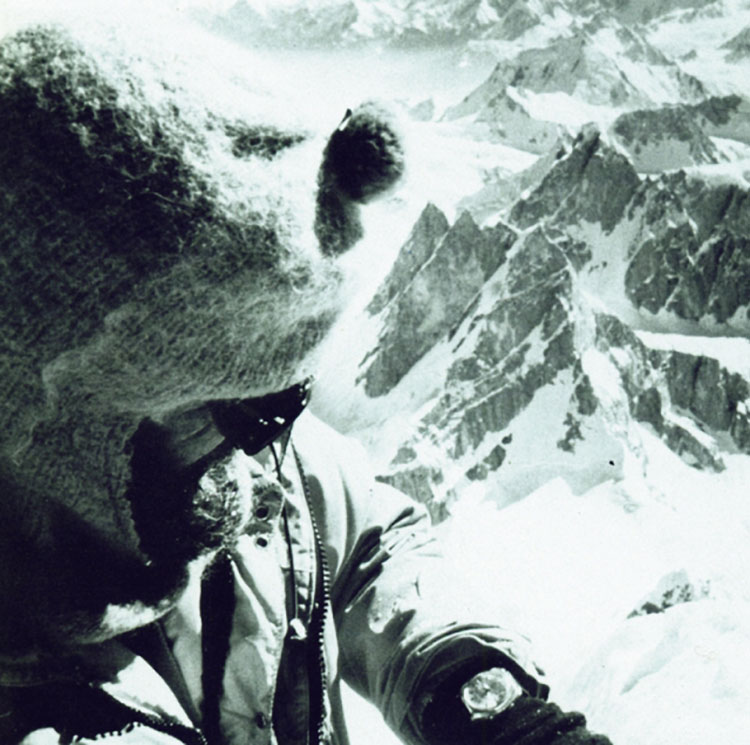 The DS-line came on market in 1959 and for the first time had the legendary case system in which the entire movement was “floated” in the case by means of a resilient shock-absorbing ring. For more information about the DS models, check out this page.
The launch of the extremely successful DS models was a milestone in the history of the Certina brand. More promotionally effective endurance tests demonstrated the resilience of the DS concept. But the Dhaulagiri expedition was certainly one of the most spectacular. Thus, the Certina DS became the epitome of a particularly robust wristwatch. Below you will find a watchable documentary about the expedition.

Reason enough to do some research. So I began to the search for further “evidence”. First, I get Max Eiselins book “The Ascent of Dhaulagiri”. But I found neither in the text nor in the photos further indices. Also on the photos in the net there was nothing usable. Sure, at this altitude and at the temperatures you do not even run around in a T-shirt and make some wristshots.
So I thought to myself: “Why do not you just get in touch with Mr. Eiselin?” A word and a blow. After he could not remember of the watches during our first phone call, after a few days he confirmed that Certina watches were in on it in his later Hindukusch expedition. This is even mentioned in his second book “Wilder Hindukusch”. A later telephone call with one of his former colleague then provide certainty. The DS watches had definitely been part of the 1960 expedition. Unfortunately the question, asked by mail, if Eiselin still have his watch remained unanswered until then…

After our first contact I wanted to meet him personally and so we arranged and met in a day in October 2015 in Lucerne. A meeting with a man who has experienced so much is, of course, an exciting thing. He told me some anecdotes from his many adventures. Of course, I was particularly interested in the history of watches. It was therefore all the more pleasing that he had actually found his watch again a few days ago! 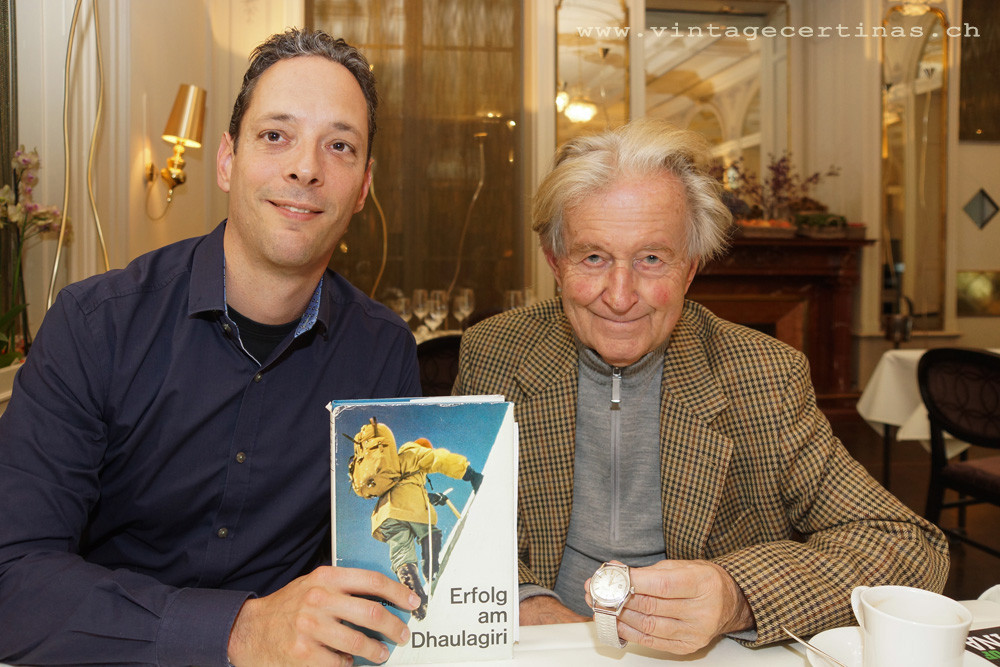 And so I could finally hold one of the expedition watches in my hands. It is a DS automatic with date, reference 5601 003. And the watches even have an engraving on the caseback with the inscription “Schweizer Himalaya Expedition 1960”. It was a great feeling to have this piece of history in my hands. These are the moments that make our hobby so great!
Max’s watch got a new dial and band over the years. Originally the watch had a Gay Frères band like the one in the bottom picture below. He told me that, at least one other expedition member has still its watch, and he still wears it daily! 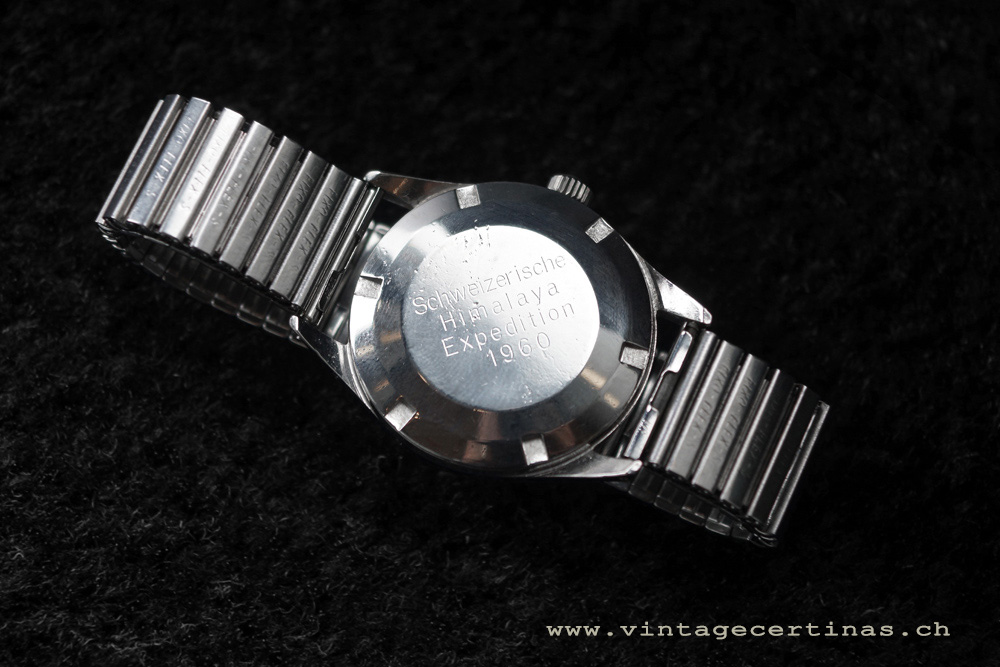 Engraving on the caseback © vintagecertinas.ch 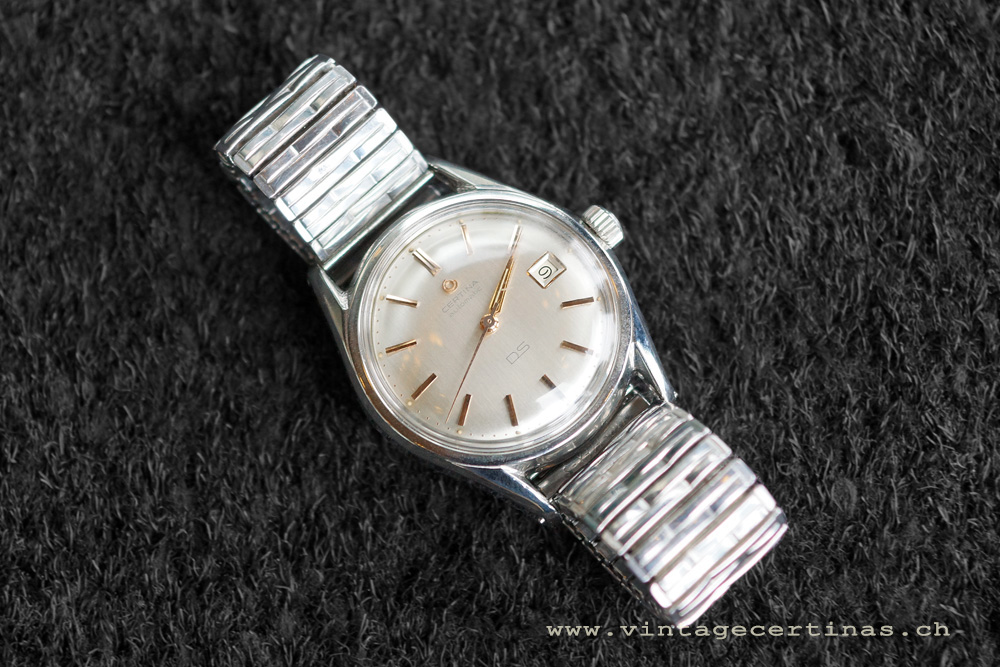 Front of the expedition watch © vintagecertinas.ch

So I could finish my “Expedition Dhaulagiri” for now and the whole story in the Certina History can definitely be considered as secured. I keep in touch with Max and so I may soon be able to deliver more material. 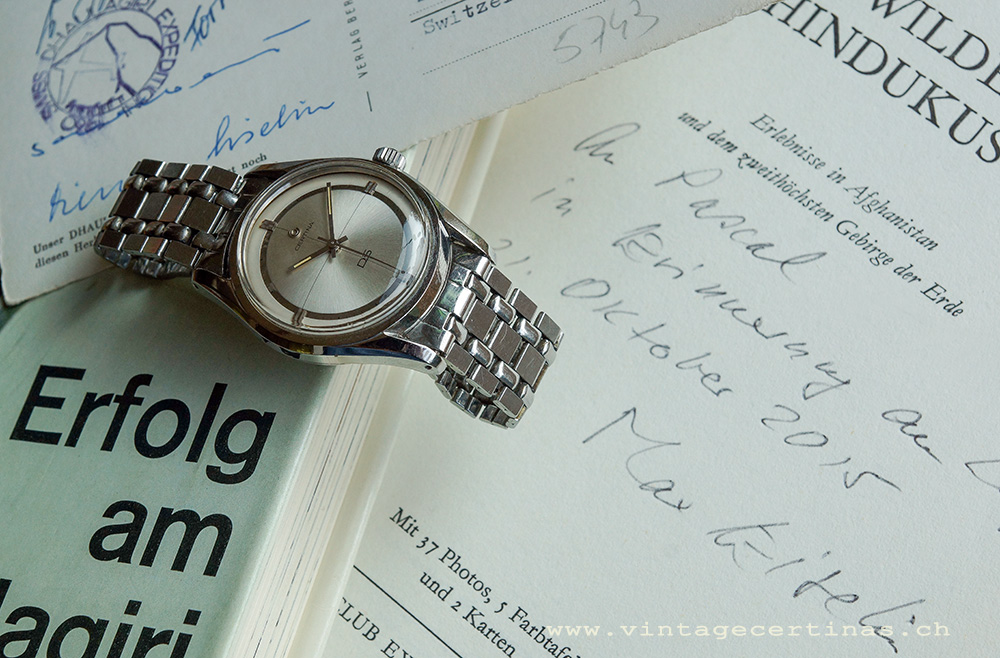